Evolution of The Tarot Revealed.

In the 1980’s when I began teaching tarot reading, students asked for a few notes to help them to remember card meanings. I typed out (yes, on a typewriter) a few pages and had them photocopied for the classes. The next year students requested more notes, specifically on the meanings of reversed-cards and tarot layouts.

Gradually, the course notes grew to 60 pages, then 100, well beyond what I could staple together. In the early ‘90’s I had them photocopied and spiral bound at my local printer (see left hand image of a former students notes, personalised with a colourful sticker.)

A student who was repeating the course asked if she could reformat the notes. She offered me a copy. They were a marked improvement on what I had typed, with bold headings and a few charts. It was suddenly obvious that with some improvements, it could become a book.

Five years later The Tarot Revealed (black cover) was published and it sold steadily from 1995 until 2008, when I moved it to a new publisher. A revised edition was published (right-hand cover image) with some colour charts. Surprisingly, it’s still in print in English and Chinese language editions, providing a clear and simple introduction to the subject. Thanks to my students for telling what they needed to improve their learning experiences. 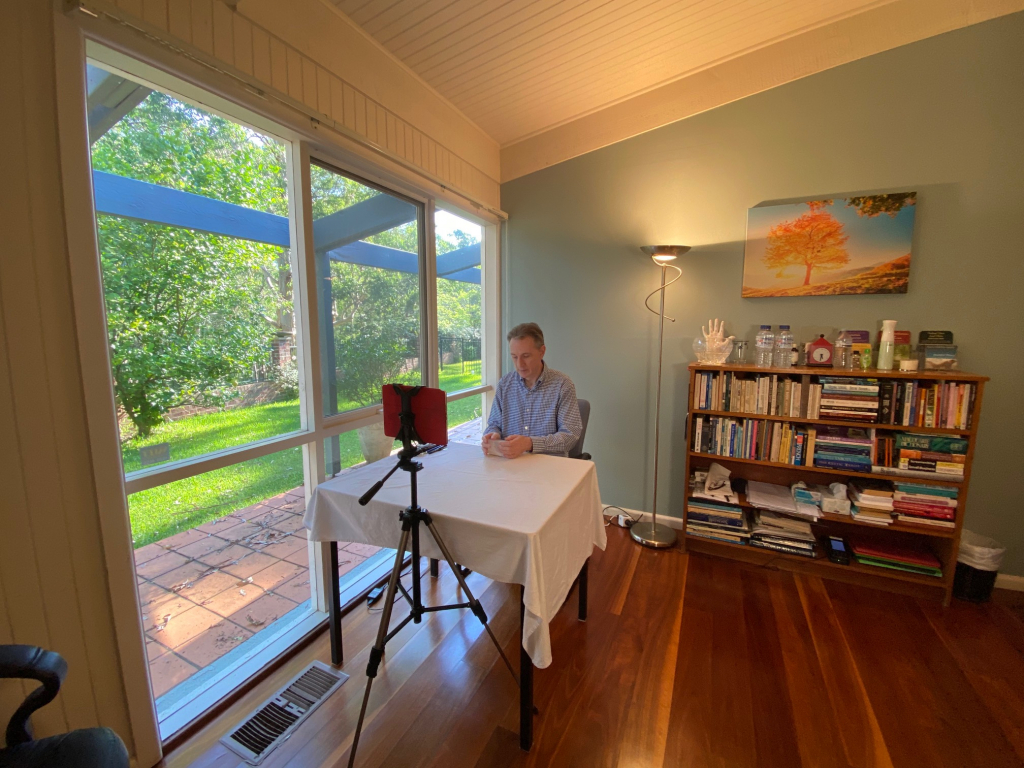 I’ve been giving distance readings via Skype, FaceTime and Zoom since March 2020 and it looks like in-person sessions are still months away. It’s not the same as having clients in the room but as we can see each other during these sessions, it’s the next best thing. One client was grateful she didn’t have to navigate my driveway, which can be a distinct benefit. I’ve read for clients in their cars (the only quiet room on the house), in cafe’s and one guy ate his lunch while seated in his garage with a small dinghy strapped to crossbeams behind him. Adaptable is the new black, apparently. I expect to be giving a reading to someone who’s powerwalking by the beach any day now. 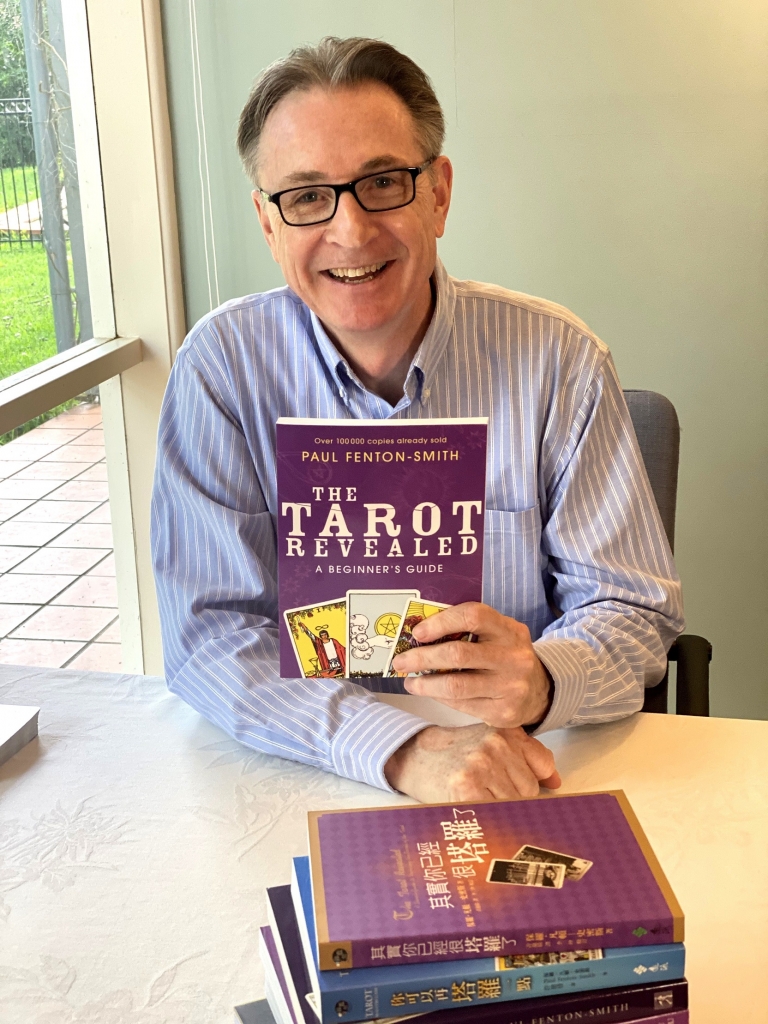 This month is the 26th anniversary of my first book, The Tarot Revealed and what a ride it has been. This book has recently been selected as one of the best tarot books available in the US by Oprah magazine (see link below).

The listing was a total surprise to me. I’ve had my head down writing my next book. To be included in a list like this without even submitting a book is the stuff of dreams. In 1994, when this book was still a draft, I used my tarot deck to decide where to get it published. I didn’t know where to begin.

I visited several bookstores (remember them?) and hunted through the Mind Body Spirit sections to find publishers in Australia producing tarot books. There were 11 possible publishers, both local and international. I listed them and then asked the cards about each one.

Yes – I know that you shouldn’t read for yourself because you lack objectivity but I’m guessing that everyone reading this who has a deck has read for themselves in the past year.

The cards indicated that three of the 11 publishers might be interested in the book. I composed a cover letter and sent some sample chapters to those three publishers. All three were interested. I began negotiating with them. Christmas arrived and negotiations paused. In late December I received a Christmas card from one particular publisher, signed by all 12 people in the editorial department. I knew that these were the people I wanted to work with. In the next eight years, Simon & Schuster published my first seven titles.

I’m a natural sceptic, so to test that I wasn’t imagining it, after I signed with Simon & Schuster, I sent cover letters and sample chapters to the other eight publishers. There was no response. The stony silence only confirmed the accuracy of the tarot with my publishing questions.

Seven years after I sent those sample chapters, I heard back from one publisher explaining that they didn’t have sufficient faith in this particular project to pursue it. The Tarot Revealed was already in its sixth reprint at that time. The Chinese language edition has had over thirty reprints and some reviewers explained that they wore out their first copies and had bought replacements.

In 2007 Simon & Schuster decided to take it out of print so I immediately signed with Allen & Unwin, who redesigned the cover and the interior, allowing additional text, before publishing it.

I’m delighted to announce than next month my latest book Advanced Tarot is being released in the USA and soon after in the UK. The cards predict positive outcomes for this book too. It’s a long way from when my first book The Tarot Revealed was typed course notes, spiral bound at a local printer and given to students at weekend tarot courses. As a book, it has been very well received in Australia and I hope that overseas readers will be equally pleased with it. 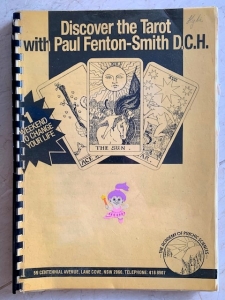 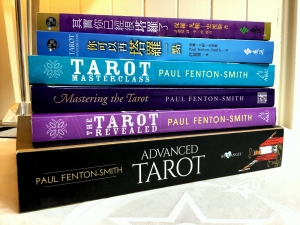 By using the tarot, I located a great publisher and several more since then. I still have to research and write each book but the cards helped with the parts where I lacked experience. This included marketing, choosing titles and sometimes deciding what book to write next. It’s a bit like insider trading except it’s legal and much more fun. 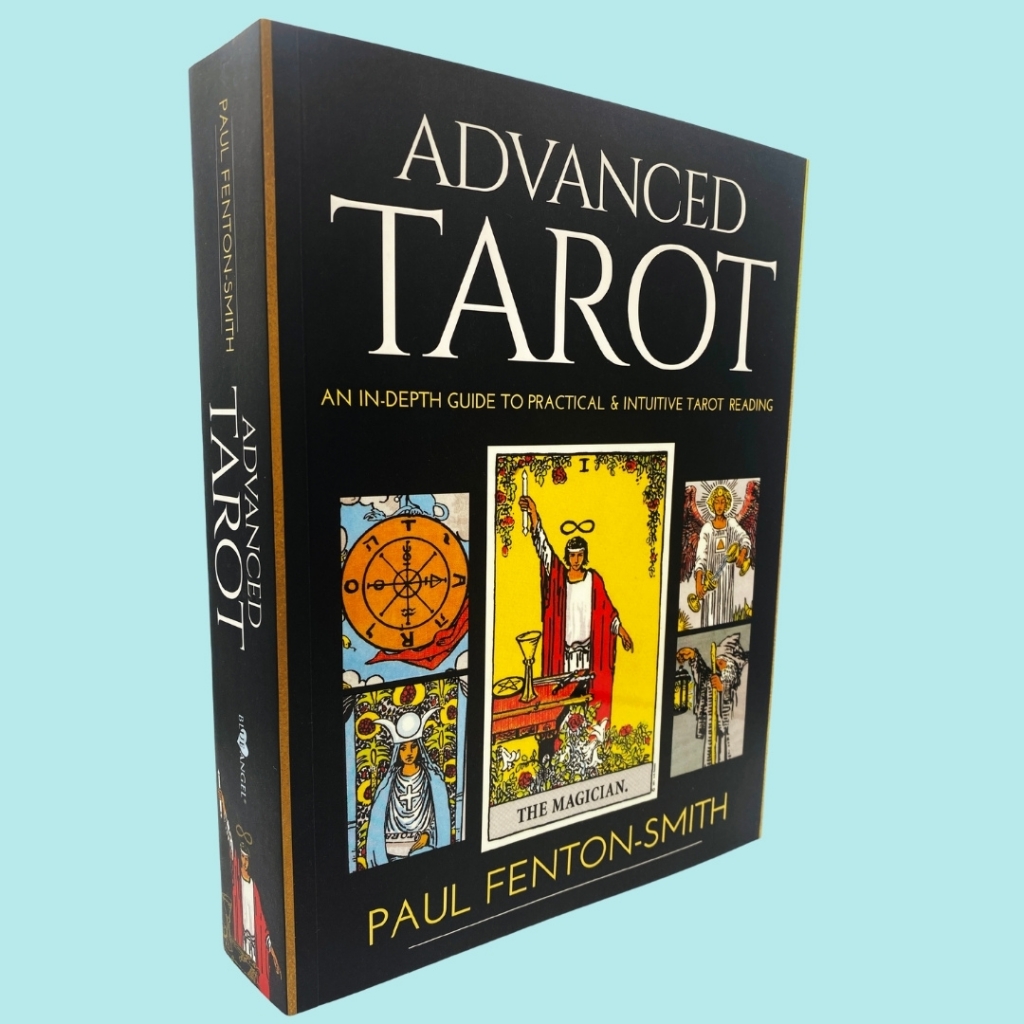 Sometimes, when writing, you’re so close to your work that you cannot clearly see what you’re creating until it has been edited, polished and designed. After initially attempting to refresh my old, out of print title Mastering the Tarot, I think I might have inadvertently written the definitive tarot book.

Spurred on by a book reviewer who was dismayed that my card meanings weren’t the same as all of the others she had read, I was motivated to break each card into clearly defined meanings. I figured that if you want a book that echoes your other tarot books, simply read those books again. Surely increasing knowledge involves exploring different viewpoints and approaches to a subject.

Looking back, I might have overdone the subsections for the court cards, breaking them into 14 different aspects, seven upright and seven reversed sets of meanings. At 556 pages, it’s a comprehensive tome, that’s likely to be my final tarot book.

If a client asks a question about the success of a creative project and the outcome is dismal, it’s possible to ask what decisions or actions will result in a more desirable outcome. The client can also be encouraged to ask about other, more favourable projects or if it’s best to postpone current plans. Sometimes the timing is wrong and in other instances, focus is better directed elsewhere.

In January 2020, I asked about an interstate festival I’d been planning on visiting as a guest speaker. The cards indicated that I wouldn’t be at that festival in 2020. I then asked if it was wise to attend the festival and the answer was a clear no. At the time, it didn’t occur to me to ask if the festival would be cancelled. By May, everything was cancelled and I was glad to be safe at home. Sometimes, knowing the right questions to ask can illuminate the path ahead.

This new title, Advanced Tarot was released in Australia in February 2021. It completes the set and fits neatly between The Tarot Revealed and Tarot Masterclass. 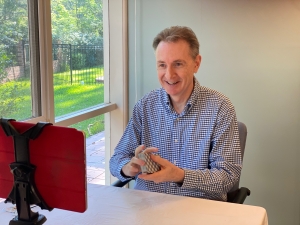 I ran a couple of distance courses last year for international students who loved them. I’d previously avoided using PowerPoint slides and have finally been dragged, kicking and screaming into the 1990’s. Soon I hope to be the personification of modern man. One can dream.

Short (2-3 hours) workshops aimed at zoom students are very popular right now, until we’re all allowed out to play again. It was tricky at first, designing games and exercises for students to use in breakout rooms on Zoom but not impossible. The feedback has been enthusiastic.

These workshops include notes to download. Some of the intuitive development classes also include a guided meditation download to provide lasting progress after the sessions.

My private Skype and Zoom private lessons increased 175% last year, providing a viable testing ground for some of the teaching methods used in the new workshops. I expect that 2021 will include both in-person and distance courses for local and overseas students. In-person courses won’t resume until the final months of this year, depending on the progress of vaccinations. 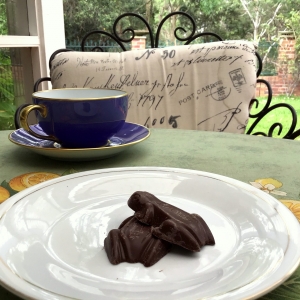 I blame the chocolate of course. After consuming a couple of dark chocolate frogs, I was inspired to design a three-day course consisting only of games, exercises, demonstrations, guided meditations and practice sessions. It’s to accompany a new book I’m completing. It’s a sequel to Intuition with a working title of Advanced Intuition.

I believe that doing is learning, so students will be immersed in the process of trying out various methods, to discover what works for them. When developing new skills, it’s often best to play to personal strengths and talents, before tackling unfamiliar areas. As personal confidence grows, it’s possible to risk small failures and repeated attempts when mastering more challenging techniques.

Effectively, the book contains the theory while the course provides a fun experience. We often build deeper understanding of concepts when consciously performing an action. In the process, students discover each other and friendships sometimes develop with practice partners. A practice buddy can help you to hone personal skills in the months after a course. A talented and intuitive practice partner can also provide free readings for years. In these instances, it’s a course that keeps on giving. 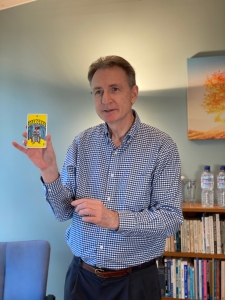 With Advanced Tarot recently released, I hope to run an advanced tarot course in early 2022. This course involves games, exercises, demonstrations and practice sessions, whereas the book covers the theory. Being an advanced course, it includes personal demonstrations with volunteers who are strangers to the class and Skype readings for students to observe the process and then join in for a group reading.

As some students will only be practicing on screen with friends after the course, they need to understand the distance reading process. It will also help them to practice with each other between classes. 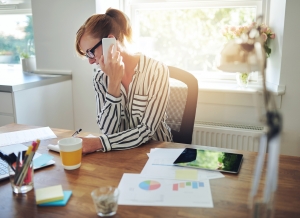 Four editions in 24 years.
In March of 1996 my second book Palmistry Revealed was released (red cover) and a few years later a US edition (yellow cover) appeared in print. In 2008 a revised edition was published (brown cover) in Australia and in 2017 I completely revised and expanded it to include over 100 colour photos of hands for easy reference (green cover).

It offers a complete guide to hand reading with examples from life and over 100 line drawings to make for easy reading. Since its release, I’ve introduced inexpensive distance palm readings from photos. These reports offer a great deal of information and require five or more clear photos of hands to work from. Although not as in-depth as personal readings, being able to enlarge digital images allows for closer examination of the tiny lines in palms.