To the untrained eye, most hands appear identical. Each contains four fingers and a thumb, nails at the tips of each finger and a palm at the base of the fingers. However, to people with knowledge of the ancient study of palmistry, the hands divulge all types of secrets. Even a quick glimpse of them at a distance can sometimes reveal character traits plus preferred approaches to challenges.

Long smooth fingers that are often used in jewellers’ advertising contrast starkly with the shorter, knotty fingers usually found in hardware catalogues. Then there are old sayings that experienced palmists know to be false. “Cold hands, warm heart,” is a common one. In reality, continually cold hands are often the result of poor blood circulation. People with this condition are usually less warm hearted than individuals with good circulation. If you are standing at a bus shelter on a cold, wet, windy night, shivering, how warm-hearted would you feel? It’s likely that you’d be conserving as much energy as possible to remain comfortable and to stay alive.

Another erroneous viewpoint is the belief that people with long fingers make excellent pianists. Although these people may appreciate the sounds of a piano, they often lack the dedication and rigour to practice on a daily basis. There are exceptions to this rule, naturally.
Another mistaken belief is that individuals with small hands are better suited to delicate, intricate work. However, if you want a jeweller to set a number of tiny stones into a ring, it’s usually better to select someone with large hands. People with big hands often focus on minute details whereas individuals with smaller hands usually prefer larger projects. Essentially, small hands enjoy big plans.

The Clubbed Thumb
This was traditionally called the ‘murderer’s thumb,’ as people who have thumbs like this also have potent tempers. This thumb has a short first phalange (section) and is broad. The tip of the thumb is fleshy or bulbous and the thumbnail is short and wide.
Someone with this type of thumb usually displays a strong will plus well-developed control over emotions. Consequently, when continually frustrated or bullied, resentment festers before finally exploding. When angry, individuals with clubbed thumbs can clear a room in seconds, causing others to scurry for safety. Of all the clubbed thumbs I have seen, the person has not lost his or her temper more than five or six times in 30 years. However, it is usually a dangerous, highly charged reaction on the rare occasion that it erupts.
Clubbed thumbed people usually understand at a fundamental level what they are capable of doing when furious. As a result, they often walk away from circumstances that trigger the urge for a fiery outburst before personal actions lead to years of regret. If a crime such as murder is committed by a clubbed thumbed individual, it is unlikely to be premeditated but usually occurs after the person has ‘snapped,’ temporarily losing control over reason.

Crooked Little Finger.
In a hand reading, the fourth or little finger represents communication. When this finger is crooked, (see picture) it can indicate dishonest or twisted communication. This is not the best person to purchase a used car from, as he or she usually finds it easy to tailor the vehicle’s history to each potential customer. However, a gently curved finger (sloping towards the third finger) suggests a private individual, who naturally conceals personal emotions and motivations from others.

Knotty fingers.
Prominent knuckles (A above) or knotty fingers reveal an eye for detail, with these people sometimes overlooking the obvious in appreciation of the finer points. They usually need plenty of time to reflect when making important decisions.
When purchasing a home, a car or something significant, people with knotty fingers like to research their intended purchase, to avoid making mistakes. If they buy spontaneously, they often end up with something that doesn’t fit, is the wrong colour or is completely unsuitable.

Smooth fingers.
In contrast to knotty fingered people, individuals with smooth fingers usually make swift choices spontaneously and intuitively. Their best decisions often only take moments, whereas extended deliberation sometimes leads to confusion for these people. Smooth-fingered people usually make excellent managers who can multi-task and keep an eye on a whole project while delegating the finer points to others. These individuals do not enjoy repetitive, detailed work.

Flexible thumbs.
Thumbs are either stiff or flexible at the joint closest to the nail. People with elastic, bending thumbs are usually spontaneous, adaptable, generous and they prefer to avoid arguments. When bullied in a conversation, they’ll sometimes tell others what they want to hear, just to keep the peace. Later, these people usually do exactly what they had planned to do anyway.
Flexible-thumbed individuals bend the rules without hesitation. Carlos was a typical example. When he commenced a new job, his first task was to collect some letterhead paper, to write himself a positive reference upon departure. Naturally his resume contained glowing tributes to a highly respected, motivated man who would be sorely missed. Supple thumbs are found mainly in the hands of Latin and Celtic people, whereas they rarely occur in the hands of Asian people.
Flexible-thumbed people can fall in or out of love in a flash, as they are emotionally spontaneous. This occurred when I visited Ireland in 1988. I couldn’t find a sandwich shop anywhere, so I poked my head into a dry-cleaning shop to ask directions. The young girl behind the counter had a radiant smile that negated (or dissolved) the miserable day and I fell instantly in love. I returned five minutes later with a bunch of flowers. She blushed nervously as she accepted them. Later my stiff-thumbed travelling companion Gareth choked on his sandwich when I told him.
“What? You went out for lunch and you fell in love with the girl in the dry cleaners? You weren’t gone long enough to post a letter, let alone fall in love.” He shook his head as he sped into traffic onto the next town, leaving my emotional possibilities behind. The stiff thumb cannot be bent backwards at the upper joint; People with stiff thumbs usually reveal themselves to others slowly. They build friendships gradually and appreciate loyal, steadfast people. Individuals with stiff thumbs are often stubborn when pushed and are not afraid to argue their position when necessary. 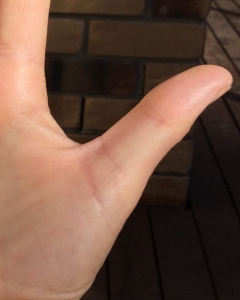 Northern Europeans tend to have unyielding thumbs, including German, Scandinavian, Northern Italian, Russian and English people. Unbending thumbs are also characteristic of many Asian people, although a small number of Thai, Japanese and Chinese individuals have flexible thumbs. I’ve not studied the origins of the different Asian groups to determine where the clans with flexible thumbs originated. Stiff-thumbed people tend to dominate individuals with flexible thumbs. When stiff and flexible-thumbed parents have children, their offspring usually have rigid thumbs.
Delving into palmistry is basically an exploration of life. A person’s hands reveal individual tastes, talents, temperament, sense of humour plus health issues. Major life events from the past and the future are also shown when examining the backs and fronts of both hands. Some sceptics suggest that palmists are soothsayers, telling clients what they want to hear but an experienced palmist can usually confirm past major events when exploring the hands of complete strangers.
Our palms contain maps of our lives. It’s possible to examine clear photographs of hands and present a written report without meeting the individual. This is the real test of palmistry, when someone can accurately read the hands of a stranger and identify character traits and personal interests without actually encountering that person. However, reading from photographs has its limitations, particularly with dating life events, because the actual hands are not present for careful measurement. It also not possible to test finger flexibility or firmness of the palms from photographs. Despite these restrictions, plenty of information can still be gleaned from clear printed copies of a person’s hands.   © Copyright 2019 Paul Fenton-Smith.